Ugandan Female Rappers: Have they Been Recognised?

Uganda  embraced the hip hop Culture about 15 plus years ago and honestly speaking it has been for a long time a male dominated Genre and Culture. Despite the emergency of Hip hop cliques, groups and Gangs* as some call them, that boasted of some nice and lyrically reach Female rappers or FemCees as they are globally labeled.–“the male rappers dominated this spectrum. Whether mainstream or Underground it was unheard of for a female Emcee to gain more attention on a scale of 5 (five-to narrow it down) than the male counterparts. On hiphop’s attempt to grow, the male rappers seemed to take the lead than the Femcees.” Uganda has over five established hip hop artists including Navio , Ruyonga , Enygma , Sylvester, Abramz Tekya, Lyrical Gmc, Babaluku and more(who are the old generation who have ‘kept it real’ and still relevant). The industry also boasts of newer and fresh rappers like Pryce Teeba, Patrobas, Tucker Hd AJO, Llyboc, Anonymous, GoldDust and many more youngens*.

Whether mainstream or Underground it was unheard of for a female Emcee to gain more attention on a scale of 5 (five-to narrow it down) than the male counterparts.

well you notice i didn’t identify any female rapper up there. You may be asking Your self now ” Does Uganda have any Femcees?” Well friend we all know the answer Friend. YES and they are a FEW ESTABLISHED and RECOGNIZED. Should we blame it on the chauvinist nature of our society? or Is it because the males ventured in the culture first?. Globally Female rappers still struggle with negation and all the stereo types of WOMAN!. Mc Lyte was no exception about 25 years ago. When rap Music emerged in the 1970s it took about 15 years for Female rappers to get some air play, even when they did they struggled to prosper through. But enough of the “Far story” 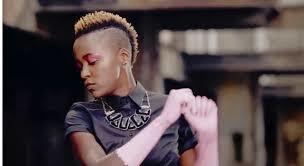 Keko shot from See Ya Video

In Uganda Keko (real name Tracy Joycelyn Keko) is so far the first  most established femcee who has enjoyed massive airplay in Uganda, East Africa and the rest of Africa. She was greatly embraced by 2010. her biggest breakout track “how we do it” gave her a place in the hearts of hip hop lovers. Right now she is signed to RockStar4000, a sony Africa entity. She has a lot of very fine music videos for tracks like ‘see ya’ , ‘mutiima’ and many more. With no doubt she is the leading femcee right now in UG. However even with  her enormous succes there have been few femcees emerging on the scene.

As the male counterparts deliver their content out, a sort of challenge is developed for the female rappers to make music that highlight the sensitive issues that as Ugandans we face. Rappers like RoyalGee, Lady Slyk, Becky, Susan Naava( remember her on competition is dead All Star rappers track) had some vibrant features on the scene as far as I remember. Of course we can’t say newer female rappers like Fasie didn’t emerge then—Ninja C too. As 2015 ended  there were few female rappers gaining required rotation like the males. There was only one concrete project by Ninja C :Ninja Attitude Mixtape. Is Something wrong with the industry? , may BE.

Under the Bayimba Hiphop bootcamp managed by Sylvester kabobombo the number of female rappers sort of increased basing on the last boot camp. We have seen Femcees like Tumwine Cynthia or well-known as Ninja-C / Herninjaness get on male dominated projects such as BaruBeatz Redefinition Ep. this is a Plus for the females. NTV’s News Beat some How paints it clear that the females can in Uganda spit nice elite material. I could say Lady Slyk is the face there, though other young Femcees get featured.

It is not written any where that females shouldn’t rap but some people could think that way. to bring Back MC Lite, she laid a foundation for her predecessors in America to rap out as “woman”. So my point here is the inspiration from Keko or any other Femcee (Ninja-C name it) like MC Lite and TLC did in America has reached somewhere, but Hip Hop Culture   has for a long time been male driven.: I mean art like Breakdance, Beatboxing, Turntabilism, & Graffiti if mentioned in a conversation am quite sure one female wouldn’t pop up easily and therefore with Rap Music itself that’s where a few are fairing. And as a sort of notion many rappers in and out of Uganda have painted a females role in society negatively and highly degrading, which is a disease eating real hip hop.

it is all summarized in this Quote:

— assassinated even — that who would want to listen?” —MC Lite

Founder NuveyLive.org. Ayella is a passionate lover of Hip Hop with an expansive knowledge base that keeps growing. Lover, Poet and techie